Frequency response is the way audio equipment changes the frequencies we send to it.

Be aware: an audio signal is not characterized by frequencies alone, but by phases too. Which is going to be drawn into a different graph, called phase response curve.

It is a fundamental feature of sound. But, in case of music production, given the quality of modern equipment, it is usually unimportant.

The same concept doesn’t hold true in case of live audio systems, in which phase plays a crucial role due to the strong environmental interactions involved. Like wind, humidity, and the huge size of arenas, for example.

If you want to delve deeper in this topic, at this link you will find more information about it.

On the vertical axis, the graph will show how the instrument is going to alter frequencies. That is, the dB value of its chromatic variation (“chromatic” in that the frequential components of a sound are going to define its “color”. In other words, its timbral capacities).

On the horizontal axis, the graph will show which frequency is altered.

The one above was an example of an empty graph.

Now, let’s see a frequency response curve within the graph.

The curve inside this graph is the frequency response.

Understanding this graph is very easy.

Speaking about this example only, we’re debating about an instrument that’s quite reliable for sounds above 100 Hz, in that a variation of +/- 2 dB is considered to be acceptable for professional standards.

Let’s now see the graph of a remarkably reliable instrument.

Apart from a peak at 10 kHz, where 10 dB are added (something that can be easily corrected in post production, if needed), this instrument will not alter the original signal at all.

An instrument with such a linear graph is a reliable one.

In fact, it is the frequency response of one of our favourite microphones during orchestral recordings.

Let’s now see the graph of an average instrument. 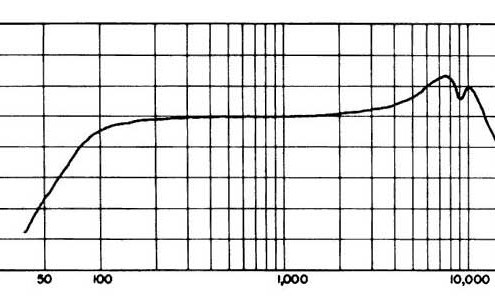 This instrument is not reliable below 100 Hz, and it shows some anomalies around 7 kHz that may result quite annoying.

But all in all, it’s a reliable instrument in situations where a complete tonal fidelity is not required. Like, for example, noisy live shows.

In fact, it is the frequency response of a quite common dynamic microphone.

Let’s now see a graph of an awful instrument.

If you see an instrument with a frequency response that shows so many pronounced anomalies, leave it on the shelf: it is not a reliable instrument.

That is, unless you didn’t come up with a terribly eccentric idea for your recordings.

Additionally, if you see graphs that show multiple curves for a single instrument, like this one for example

don’t worry: it’s nothing but the proximity effect.

Some kinds of microphones change their behaviour depending on their distance from the sound source being recorded.

These graphs show how the instruments will react depending on this distance, displaying different curves for different distances.

As odd as it may seem, this system will allow you to understand how an instrument is going to sound without ever listening to it at all.

Except for some uncommon exceptions, that we will cover in other articles.

If you want to know why this tutorial was made, you’ll find out more in this post:

And you got our entire website to hear if we’re talking about something that we can do.

If you found this post useful, please: share your experience with us on our social pages!
Maybe together with a link to what you’ve created, and using our official hashtag #lmkmprod to let us find you all.

We’re looking forward to hear about you!

Because these cookies are strictly necessary to deliver the website, refuseing them will have impact how our site functions. You always can block or delete cookies by changing your browser settings and force blocking all cookies on this website. But this will always prompt you to accept/refuse cookies when revisiting our site.

We highly value our customer’s privacy, and never reveal critical details about their works – such as time required and price.